A Proposal to Fix an Unnecessary Freeway back up in the Bay Area.

Why did they screw up my freeway when they put in a diamond lane?

I've seen this referenced in the local RoadShow columns.   Highway 280 going south backs up behind Magdelena Road exit in Los Altos Hills, just past Foothill College. This is kind of amazing since 1/4 mile past Magdelena road there is an extra inserted diamond lane? Why would adding a lane back up traffic? The answer it doesn't. The backup occurs because the the last two exits both shave an entire lane off of the freeway.

It's straightforward to do the math that these two exits become the bottlenecks when the freeway is near to capacity load elsewhere. Four lanes of traffic cruise along at 65 mph, bumper to bumper. Unless there was an an entire lane of exiting cars at full speed exiting the freeway (which there isn't, this is pretty much the middle of nowhere) this will obviously be a bottleneck and limit the throughput of the freeway. It's a simple queueing problem.  I guess they don't teach queueing to traffic engineers.

Ah, but you say they do teach queueing to traffic engineers.  So what are they trying to optimize when they design a freeway system? You've got a couple of choices. You can minimize travel time at a certain time of day or you could maximize carrying capacity. This design does neither. Are they purposely slowing down traffic before the diamond lane starts? Seems misguided, but there doesn't appear to be any other choice. 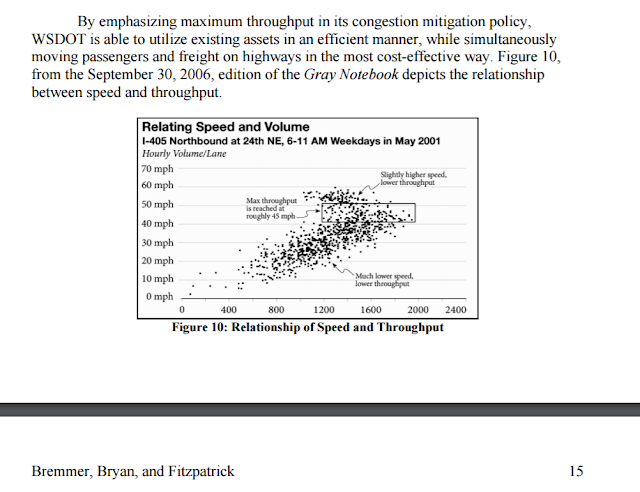 In my opinion, you should minimize the travel time (which means maximizing the average speed.) This will give you a large throughput also, probably very close to the maximum. The remarkable things about these intersections is that they have been purposely designed to cause a traffic jam. I defy anyone to come up with another explanation.  As we can see in the curve above, the WDOT claims that maximum throughput of 2200 cars per hour per lane occurs at 45 MPH and drops to half that amount at 30 MPH and 60 MPH. The latter because the spacing between vehicles increases, the former because you're just going too damn slow. 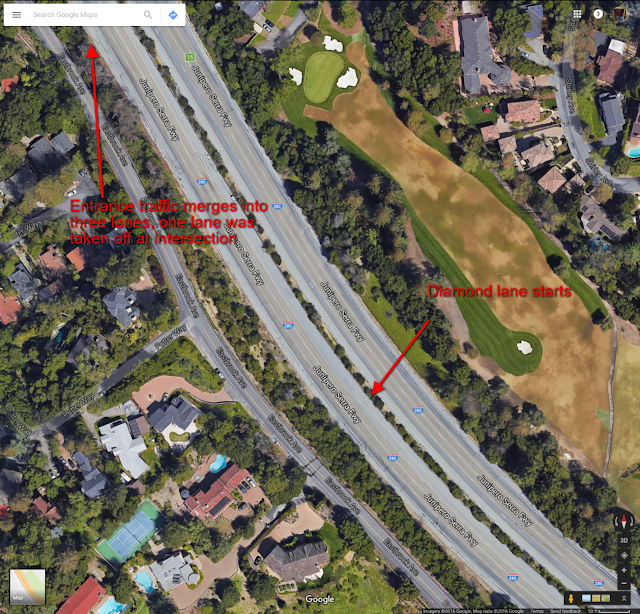 So Let's look at throughput predicted. One lane goes away to an exit, cutting the flow from four to three lanes. Then the onramp merges into those three lanes, then 1/4 mile down the road you get a fouth diamond lane back. What a nightmare. 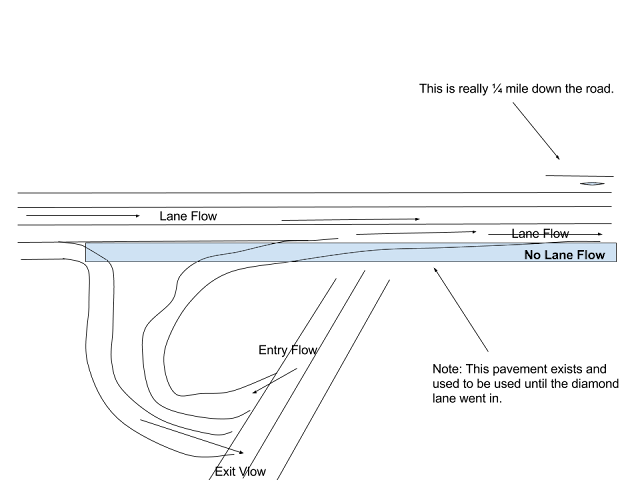 Without the disappearing lane the maximum throughput would be 8800 cars per hour, just like it is everywhere else on 280, except for these two intersections. However, there's now a missing lane. What does this cause? First we make the assumption that Exit Flow is less than the lane flow, in fact it can only be half because it comes to a light.  And that's being generous. So this lane backs up.

We use the following notation:
Utilization Rate

= 0? No, there's a divide by zero error (this formula is only good for when the utilization rate is less than 1, otherwise it predicts an infinite number of vehicles in line), the exit lane has infinite backup, you keep adding more cars than you take off. So if you take off exactly half of the cars you get an infinite backup. Great. Seems like a bad idea. So, let's assume that you take off a little bit less than half. The other cars have to merge into the lane next to them. Overloading that lane and driving it to a halt. No matter what you do here, the size of these exit lanes will cause a backup here at capacity. How could you get rid of it? 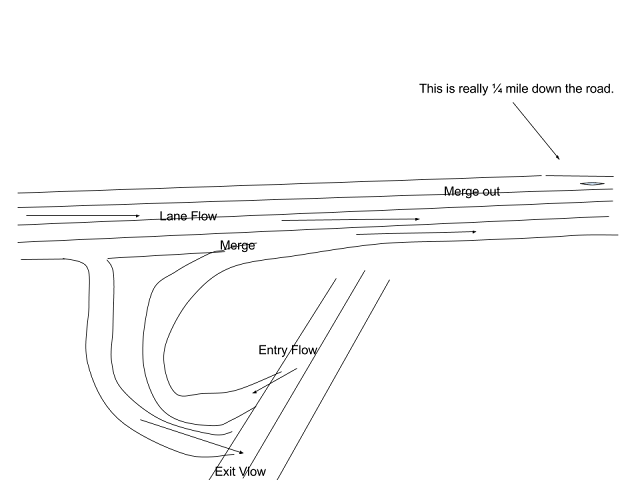 Pave the lane through. That way you get exactly what you have everywhere else. Same throughput as before and you can control the back up by on ramp lights. Why don't they do this? Who knows. There's plenty of paved space. It used to be this way. They ran out of paint?
I say we should do an experiment. There are two similar to this in front of the diamond lane. Let's change the last one and see if the backup disappears. All it takes is some paint and some Bott's Dots. It should be easy. Don't tell me about it until it's done. You might need a sander, some pry bars, epoxy, a cement cutter. Okay, it's harder than it looks, but if they can do it san francisco, we can do it in Los Altos.
One of my employees, in his spare time is writing a tool that gives the average travel time between any two points on a google map (He wants to drive to work at the time that miminizes his wasted car time.) We can use this to measure the before and after speeds and capacity. If adding a lane doesn't increase the throughput... I'll not encourage anyone to do the same thing at the previous intersection.
Time for some public activity on the roads.
Thanks for reading,
-Dr. Mike