What's Wrong With California? Utter Failure in Handling COVID-19 Pandemic in the US

July 05, 2020
China eradicated the virus in 90 days and it's economy is up and running again.
South Korea, Taiwan, Australia, Japan, New Zealand and many other countries have eliminated the virus and restarted their economies.
Europe's death rate and case rate is continuing to go towards zero and it's economy has started to reopen.
This is not the case in United States?
What is wrong with the United States?
Is it the same thing that was wrong with Kansas? [6]
Even worse: what's wrong with California?
Is it really too many Covidiots?
Methinks the data speaks for itself.
And the data says yes. 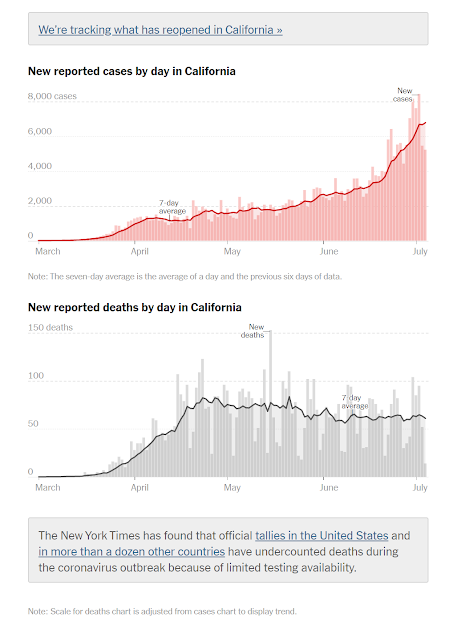 COVID-19 Cases and Deaths in California [5]
California thought it was doing all the right things. We had a plan. It was all going to be over before the leaves turned orange. We were going to open up very slowly and carefully... but we never got the deaths low enough, or the cases low enough to ensure that the virus would be eradicated, so it isn't. The crazy thing about this is that we know what we have to do to eradicate this virus. It's not a secret. We've seen many countries figure it out. A hard lockdown that drives the virus to ground in three weeks. How hard could that be? Apparently too hard for a country led by a RealityTV producer; but not too hard for a country led by a former comedian: [7]

Cases of COVID-19 in Belarus

Cases per day in Chile, UK, Pakistan, Qatar and Belarus [3]
Somehow all of these countries have managed to send their cases nearly to zero by just locking down.  Something we seem unable to do in the US, except for the NYC area. So what have they done differently? Well in NYC about 15% of the population had it. This means that herd immunity would kicks when 1 - 1/Rt = 0.15 or Rt (the retransmission rate) is about 1.17. So with masks and physical distancing it appears that as long as NYC can keep Rt below 1.17, the virus will die out. And how do you keep the retransmission rate down? You test, track and isolate. 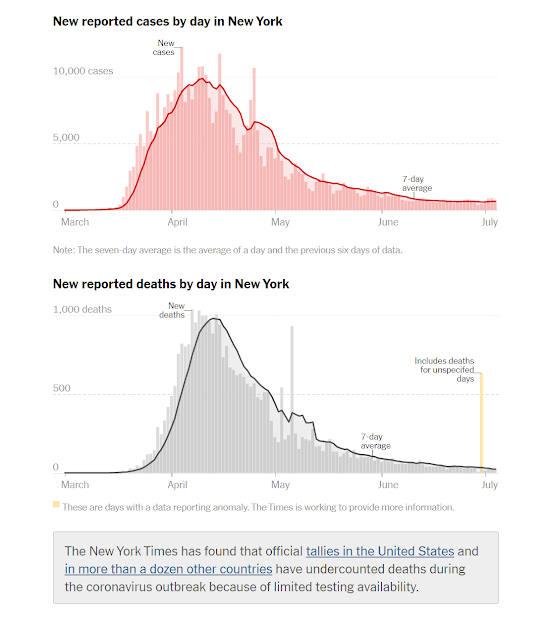 New York State COVID-19 cases and deaths [4]
Testing tells you who has the disease. Tracking tells you who might have the disease. Isolation is the way to make sure nobody else gets the disease from those who are possibly infected. Every time you increase the interactions between people (open up the economy) or increase the probability of someone spreading the disease (don't wear a mask) you change Rt = N * Pn where N is the number of interactions and Pn is the probability of a particular interaction spreading the disease. This is why healthcare workers are infected at three times the rate of the general population; even though they are very careful and Pn is very small, they are around infected people all the time, so N is very large. Compared to a quarantined person a Nurse might have 25 times as many interactions with an infected person each day. In order to stop the rapid inundation of the hospital work force with the virus they have to reduce Pn by a factor of 25 just to stay even with the population at large.
But all of this is moot. China has shown us how to contain the virus: Test, track, isolate. They've done it three times. The original outbreak in Wuhan, a subsequent outbreak in Wuhan, and a small outbreak in Beijing. So has South Korea. Test everyone in the infected area and isolate those who are actually infected. China defined the infected area as the entire city of Wuhan at one point and performed eleven million tests in ten days to determine exactly who had the virus (about 150 people), isolated them and eliminated the retransmission to almost zero. The virus slowly dies out at this point. Reinfections from travelers can still occur, there is some small false negative rate of the testing procedures that will let infected people through, but with more testing, ti can be limited to a rare event.
So we could do this in the United States. In fact, we could do it today with the right national coordination, with the current amount of testing, if we just did it right. Universities with large medical centers are doing it. Everyone at the University takes the tests to show that they are virus free before classes start, then you retake the test periodically to detect any transmissions. You track and isolate anyone who gets it so it doesn't spread. So for a University that can make it's own tests this seems like a viable proposition.
For the United States, this isn't quite as straightforward. We don't have enough tests and we aren't increasing the number of tests fast enough. 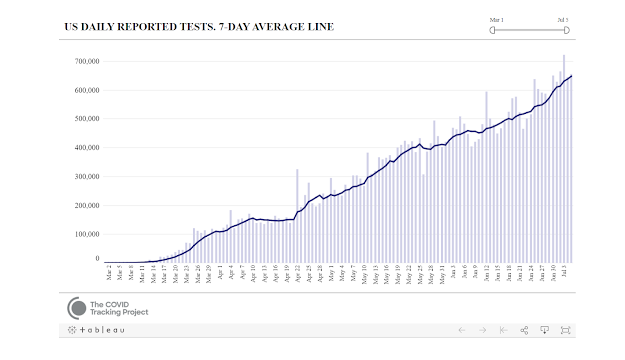 Tests per day in US [1]
There doesn't appear to be any exponential growth in testing. We've only tested about 5-6 million people and we're adding new tests at the rate of 50,000 per week. For us to get enough tests to test everyone once it would take us many years, so let's hope our test creation doesn't stay linear, but actually starts to go more exponential. If we double the number of tests every month, we could test everyone in the US in another ten months.
Another way to test everyone is to do batch testing. Since we know the average infection rate from our previous tests, we can test a bunch of people at once, with the same test, that will test positive if any of them do. To maximize the efficiency of the testing you want to make the number of samples in a test be as shown in the figure below where p is the probability of finding an infected person in the population at large. This probability can be estimated as k * Nt * Pr / PA, where Nt is the number of tests we run today, Pr is the rate of positive results, k is a factor for the missed people that are actually infected (estimated to be around 2 - 3 in the current state of affairs) and PA is the population of America.  Right now (July 4th) Nt = 700 k, Pr = 7.5 % and Pa = 350 million. So p is about k * 700 k * 7.5 % / 350 million or 1 out of 2000 people should test positive (p ~ 0.0005). 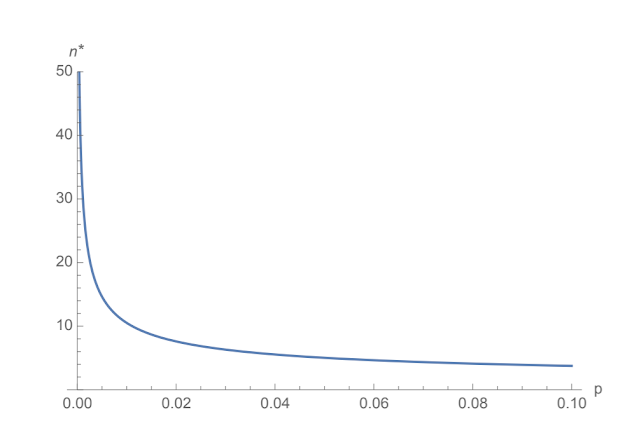 Pool Size for an expected positive test outcome percentage [2]
This says that if we tested the whole country we could do it with about 50 to 100 times fewer tests than testing everybody once. 350 million divided by 50 is 7 million tests. That's only ten times more tests per day than we do right now. If we could grow our test rate by a factor of ten and keep the virus curve flattened out (we're having a bit of trouble with this) we could then test everyone and isolate all the infected for two weeks to eradicate the virus. We should still work on a vaccine, but we should be spending almost any amount we can to increase the testing rate. The economy is losing $40 Billion per week. If each test cost $100 this would cost us less than $1B. We should be ready to do this multiple times, the pay back is huge, the uncertainty of this working is less than making a vaccine for a retrovirus (never been down before) or a corona family virus (never been done before) or bringing the vaccine to market safely in less than two years (never been done before.)
Why isn't the federal government doing this? I have my opinions... And most of them say the failure in the current administration is driven from the top. When the conservative, republican ideology is to only do that which the leader proclaims to be a good idea and the leader doesn't understand science but only understands RealityTV production... well, we're screwed. Since this is more complicated than ratings or polls it must be baffling to the current holder of the highest office in the land. However, as soon as he is voted out in November, we can put this plan in place and be virus free by Christmas time.
I'm feeling more optimistic than I was yesterday.
Have a merry Xmas!
Thanks for reading,
-Dr.Mike
References:
[1] US test rate including positive test rate: https://coronavirus.jhu.edu/testing/individual-states
[2] Optimal pool Size: https://idss.mit.edu/wp-content/uploads/2020/04/04.28.2020pooled_testing.pdf
[3] Decreasing COVID-19 cases internationally:
https://www.nytimes.com/interactive/2020/us/california-coronavirus-cases.html
[4] Decreasing COVID-19 cases and deaths in NYC:
https://www.nytimes.com/interactive/2020/us/new-york-coronavirus-cases.html
[5] Increasing case rates in CA and decreasing death rates:
https://www.nytimes.com/interactive/2020/us/california-coronavirus-cases.html
[6] Believing things that are demonstrably untrue because a billionaire told you about it.
[7] I've always maintained that comedians are smarter than either actors or producers. They write their own material for at least part of their career, at least in the United States.

April 23, 2020
Flat Wron g the end piece in Scientific American, in the latest issue (May 2020) got me to thinking about how we could just end this idiocy that leads to many, many people being driven into believing obviously fallacious conspiracy theories. Did we actually go to the moon? (hint: we did.)  Was Obama born in Hawaii? (hint: yes.)  Is he Muslim? (hint: no.)  Is QAnon saying anything that's true? (hint: no.)  Are the Jews trying to take over the world (hint: no.) Are aliens here? (hint: no.) Do humans cause Global Warming? (hint: yes.) Have the Clintons murdered tens of people? (hint: no.) Did the Russians help the Trump campaign? (hint: yes.) Yada, yada, yada. We can't actually have much proof against most of these fallacies, but the Flat Earth one, we can if we actually get high enough in the atmosphere to see the curvature of the Earth. You will convince some Flat Earthers they are wrong. Most will just come up with some other excuse and continue to try and j
Post a Comment
Read more