Okay! Today I get to play armchair epidemiologist! But first, let's all learn the Rule of 72!

The Rule of 72 is a way to understand exponential growth. Exponential growth is something we see all the time in information technologies. Moore's law [1] is an example. It says that every two years the number of transistors you can fit into a fixed area doubles. 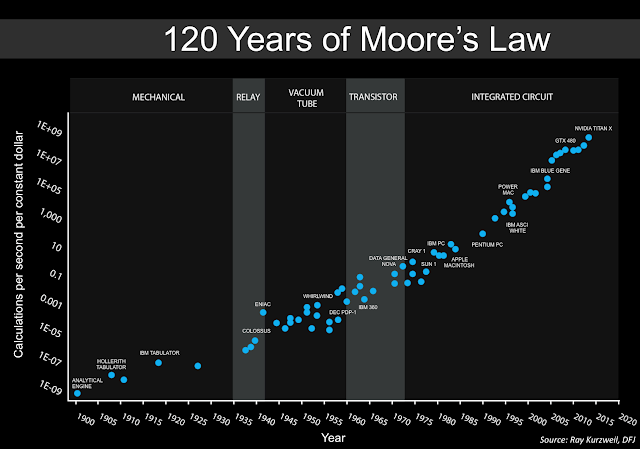 This picture is updated from one of Kurzweill's books: [2]  The Singularity is Near. It shows several things that will become very useful to be able to predict exponential growth rates. There's a linear X-axis that goes in terms of years (it could be any standard increment of time, days, hours, weeks, months, etc. Then there is a Y-axis that is given in powers of 10. Each tick represents 10 times the tick below it. Thus a straight line in this graph is actually an exponential growth curve. For every increment of time you get a multiplicative increase in what is measured.
It turns out this is also the way interest works and there's a well known hack for interest rates called the Rule of 72. You take the interest rate and divide it into 72 and that tells you how long it takes for your money to double. Lets do an example.
Assume you get 12% (Interest) on your $100 (Principle) deposited in a bank (it happened in the 80's, just sayin') that means after the first year your hundred dollars turns into $112 dollars. The formula is
P * (1 + I) = P',
where P' is the principle after one year (the same time the interest rate is quoted over.) To find out what happens after N years you just have to keep multiplying by 1 + I:
P'(N) = P * (1 + I) ^ N.
Where the " ^ N " (to the Nth power) just means you multiple (1 + I) together N times: (1 + I) * (1 + I) * (1 + I).... N times. 1.12 * 1.12 = 1.25, 1.25 * 1.12 = 1.40, 1.40 * 1.12 = 1.57, 1.57 * 1.12 = 1.76, 1.76 * 1.12 = 1,98 (essentially doubled!) How many times did we have to multiple 1.12 times itself to get to 2? 6. Six times. (You can count them.) And it continues into the future. If you want to double your money again, it's six more years. So now you have four times as much money. Or double it again, now we have 8 times as much money after six more years. How long did that take? We had three doublings (2, 4, 8) and each one took six years. So we have 8 times as much money in 3 * 6 = 18 years if we earn 12% interest.
Now where does the Rule of 72 come in? It's a shorthand way of figuring out he doubling time. To figure out how many periods it takes the return to double you can just divide the interest rate for a perioid into 72 and that tells you how many periods it takes to double. 72 divide by 12 is 6. So it takes six years (the period) to double your returns.
Lets' look at Moore's law = the thing that doubles takes 2 years. 72 divided by I = 2, so I must by 36%. Every year the engineers are forced to increase the number of transistors in a fixed area by 36%. Now Moore was being conservative as this means every year the width and length of a transistor must get smaller by only 20%. Why is this so? If a transistor's side is 80% as big as it was last year, then the area it takes up is 80% * 80% = 64% as much space, or 36% less area. So by making transistors 20% smaller we get twice as many in a fixed area every two years.
What else can use this exponential growth hacks on?
Well, the most disturbing thing in the last few years I used this rule on was the outbreak of the Covid-19 Virus last year.

What does exponential growth mean for the Covid-19 Virus?

Solving the Birthday Paradox, for Fun and Safety!