A Modest Proposal for the Presidential Library of Donald J. Trump.

I was reading the latest fiascos of Donald J. Trump and his aversion to showing reverence to the troops at cemeteries...when it gave me an idea that I think all red-blooded Americans can get behind and support.

To set the stage, we need to go back in history and see how other presidential estates have been turned into libraries, or cemeteries. In particular, it's educational to learn about what happened to Robert E. Lee's  estate in Arlington, Virginia. He inherited this estate from George Washington's adopted grandson. After the civil war, the United States seized the land for non-payment of back taxes (they didn't pay their property tax during the civil war...) then they turned Lee's front porch into a war memorial and a military cemetery. And they wouldn't pardon him, either. Lee went to his deathbed still a fervent white supremacists to the ends of his days. And we rewarded him by taking away his land and turning it into a cemetery to honor those he had helped to slaughter during the recent civil war.

It seems like Donald J. Trump deserves better. We need some place to house all his tweets, television snafus, conspiracy theories, thrashing of international agreements and dog whistles of racism in one place so they can be evident for all to see. Since he doesn't read, he has no use for a library, but the American people do. We need to never forget what a kleptocratic con-man can do to this country.

Trump is always looking for what's in it for him... so we could make a deal. Trump could donate Mar-a-lago back to the government (you probably didn't know it was a historical park for many years - and a possible Florida Whitehouse back in the 70's, but the park service thought it was too costly to maintain and the Secret Service thought it was too costly to defend) and in exchange the American people would promise not to lynch him and to build his library there.

Mar-a-lago would be a spectacular place for Trump's Presidential Library! There is no more appropriate place than Florida. We could let him stay there for as long as he likes and in return America would promise to not prosecute him for the many election fraud felonies, corruption scandals, emoluments violations and abuses of power that he has committed. He'd take that deal in a minute, he is, after all the King of the Deal! 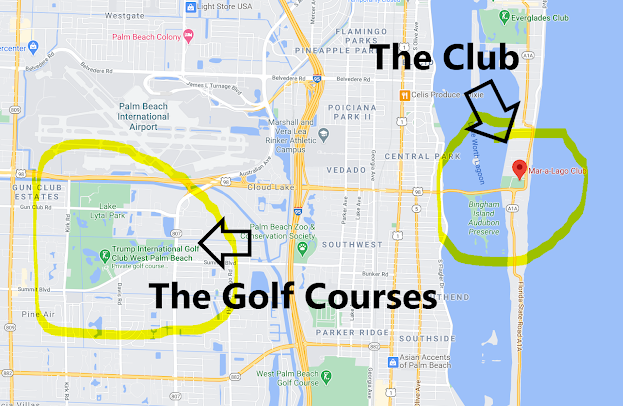 Maralago, on the Florida coast in Palm Beach. Two golf courses are just west of the club across the Lagoon and cover a few hundred acres.
As it's a library and museum there's no need for a set of golf courses, instead, I propose that we turn the golf courses into the equivalent of Arlington Cemetery. We allow anyone who's died from COVID-19 to be allowed to be interned there. It's big enough we could fit every one of the probable 500,000 people he's going to end up killing because of his incompetence. If there was space left over, it could be a national debtor's graveyard, for all of those forced to go bankrupt to save their lives because of outrageous health care costs at any point because the insurance system in this country has been sabotaged by the Republican party for decades; it's only fitting to allow the dead to be memorialized there. 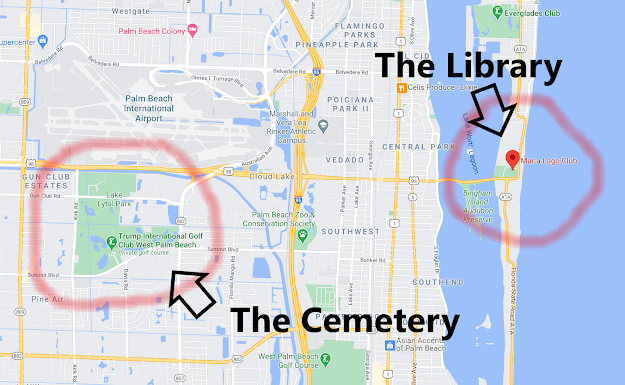 After the seizure the Club becomes the Donald J. Trump Presidential Library and the Golf courses become the COVID-19 Memorial Cemetery.
Does anyone think it's worthwhile setting up a non-profit organization with a fund-me to promote this idea? I think it is more than appropriate.
Thanks for reading!
-DrMike
6th of September, 2020, ~60 days before the coming Presidential election.

Republicans vs. Democrats. It's not conservatives vs. liberals, it's authoritarians vs. progressives.

January 10, 2019
It's Authoritarians (Royalty lovers - L'estate, c'est moi) vs. Progressives (All men are created equal) Republicans are more Authoritarian than Conservative. Conservatives want to pick an imaginary time in the past and declare it to be perfect. Authoritarians have a Father figure complex. Whatever the Father says is right. Anything else is immoral. [1]  So even though there is a streak of Conservatism in the Republican party, it's not really the basis of their morality. Their morality is handed to them by their Father, whatever he says is moral. To disagree with him is immoral. Pretty simple, easy for people who are too tired to think for themselves. In contrast, the moral authority of Democrats comes from their Progressive, American ideals. Progressives believe in the Declaration of Independence: Life Liberty and the Pursuit of Happiness All men are created equal The people agree on how they will be governed No Royal authority is accepted No one is above
Post a Comment
Read more